A group of scientists led by Prof. Ryong Ryoo of the Department of Chemistry, KAIST, has found a method to direct the growth of zeolite, a crystalline substance that is frequently used as catalyst in the chemical and petrochemical industries, the university authorities said on Thursday (Sept. 10).

Ryoo"s research team successfully created ultrathin nano-sheets, only two nano-meters thick, that are efficiently used as long-life catalysts for hydrocarbon cracking and other petrochemical applications. The breakthrough  finding, which is credited with taking acidic zeolite catalysts to the limit in terms of thickness, was published in the latest edition of the peer-review journal, "Nature."

A team from the Polytechnic Univeristy of Valencia, Spain, also contributed to the research.

Zeolites are already widely used in the petrochemical industry, but making the catalysts very thin means that reactant molecules can easily diffuse into the zeolite structure and product molecules can get out quickly. This improves the efficiency of the catalyst and reduces unwanted side reactions that can produce polymeric hydrocarbon "coke" that clogs the zeolite pores and eventually kills the catalytic activity, Prof. Yoo said.

To make the thin sheets, Ryoo and his team used a surfactant as a template to direct the growth of the zeolite structure. The surfactant molecule has a polar "head" group - with two quaternary ammonium groups around which the aluminosilicate zeolite crystal grows - and a long hydrocarbon "tail," which prevents the sheets from aggregating together into larger, three dimensional crystals. When the surfactant is removed, these flakes pile up randomly with gaps in between which further aids diffusion to the catalyst sites.

"Zeolite could be used as a catalyst to convert heavy oil into gasoline. Our new zeolite could provide even more possibilities, such as being used as catalysts for transforming methanol into gasline," Ryoo said.

Prof. Ryoo, a Distinguished Professor of KAIST, has won a variety of academic awards, which included the Top Scientist Award given by the Korean government in 2005 and the 2001 KOSEF Science and Technology Award for his work on the synthesis and crystal structure of mezzoporous silica.

In 2006, Ryoo and his research team announced the discovery of a form of zeolite that can catalyze petrochemical reactions much more effectively than previous zeolites. Because of the potential of this to streamline the gasoline refining process, it was greeted as a "magical substance" by the South Korean press. 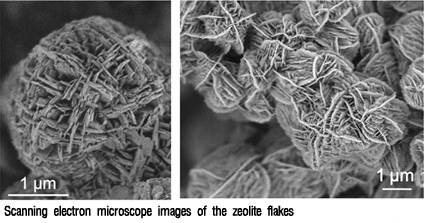