KAIST President Nam-Pyo Suh has chosen as the 2009 winner of the ASME Medal presented by the American Society of Mechanical Engineers, university authorities said on Thursday (July 2).

The selection of President Suh was unanimously approved by the 13-member Board of Governors of the ASME. Suh became the first scientist of Asian descent in the award"s 89-year-long history.

Founded in 1880, the ASME is a non-profit professional organization promoting the art, science and practice of mechanical and multidisciplinary engineering and allied sciences. The organization is known for setting codes and standards for mechanical devices. As of 2009, it has 120,000 members worldwide.

Only one ASME medal is awarded annually to recognize "eminently distinguished achievement." The award consists of a $17,000 honorarium, a gold medal, certificate and travel supplement for two days. It will be presented to President Suh during the 2009 International Mechanical Engineering Congress and Exposition, which will be held in Lake Buena Vista, Florida, November 13-10, 2009.

President Suh is an internationally known educator, engineer and inventor. Born in Korea, he immigrated to the U.S. in 1954 to join his father, who was teaching at Harvard. He earned both his bachelor"s and master"s degrees from MIT before coming to Carnegie Tech for his doctoral education in mechanical engineering.

While teaching at MIT, he founded the MIT-Industry Polymer Processing Program in 1973 and the Laboratory for Manufacturing and Productivity. He left these positions in 1984 to serve with the U.S. National Science Foundation as its assistant director for engineering, until 1988.

He invented many new materials, products and manufacturing processes, earning more than 60 U. S. patents and founding several companies. He has written seven books and more than 300 scholarly papers. Among dozens of honors throughout his career, President Suh most recently received the 2007 Lifetime Achievement from the Society of Plastics Engineers.

The ASME conducts one of the world"s largest technical publishing operations through its ASME Press, holds numerous technical conferences and hundreds of professional development courses each year, and sponsors numerous outreach and educational programs. 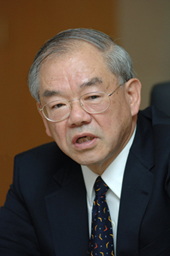