June 1, 2009-- A Drexel University-led research team late last week unveiled the newest, most central member of its collaboration with a team of Korean researchers:  Jaemi, a humanoid (HUBO). Jaemi HUBO embodies efforts to advance humanoid development and enhance the concept of human-robotic interaction. The project"s goal is to enable humanoids to interact with their environment, and enhancement plans include enabling the humanoid to move over rugged terrain, in unstructured environments and to interact socially with humans and handle objects.

"The field of robotics is among the top 10 technology areas considered engines for economic growth. Korea understands this and is aggressively pursuing robotics. To stay competitive, the U.S. must do the same," said Mark Suskin, acting deputy director of NSF"s Office of International Science and Engineering. "NSF"s PIRE program and this robotics collaboration in particular, enable the U.S. to capitalize on research in other countries and remain competitive."

The PIRE research team is composed of researchers at The University of Pennsylvania, Colby College, Bryn Mawr College and Virginia Tech in the United States; and Korea Advanced Institute of Science and Technology (KAIST), Korea University and Seoul National University in Korea.

The team obtained a version of KAIST"s HUBO humanoid, which it named Jaemi HUBO and decided to house it at Drexel University. KAIST HUBO lab has become a model of cutting advance humanoid research by relatively small teams working on tight budgets.

This collaboration of American and Korean researchers will seek to draw on the expertise of each researcher and take Jaemi HUBO to the next level of development--that is, to improve Jaemi"s capabilities to navigate and manipulate objects and interact with people in unstructured environments. Such capabilities demand information technologies like cognition, perception and networking areas. Targeted enhancement features include a capability to move over rugged terrain and in unstructured environments and to handle objects and interact socially with humans.

Jaemi HUBO will also educate the American public, particularly young people, about the science of robotics. This education process began at the Please Touch Museum in Philadelphia on May 28, 2009, when Jaemi HUBO was unveiled and introduced to a crowded audience of children and a few adults. Neither male nor female,Jaemi connected with the children, boys and girls alike. Guided by a Drexel University graduate student, Jamei moved, spoke, danced, shook hands and lead the children in a game of Simon Says. Such access to Jaemi HUBO starkly contrasts with that afforded by other high-profile humanoids that are often protected trade secrets, largely inaccessible to the public.

Museum curators are pleased to have had Jaemi visit and entertain kids during the weekend. "At the Please Touch Museum, we promote learning through a variety of senses," said J. Willard Whitson,the museum"s vice president for exhibits and education. "A humanoid not only embodies our goal of building layers of knowledge in young people, but Jaemi helps all of us celebrate the playful side of technology."

Jaemi HUBO is now at its permanent home at Drexel University, from which travel and guest appearances may be arranged by appointment. Journalists interested in meeting and interviewing Jaemi HUBO and other research team members are encouraged to contact Lisa-Joy Zgorski at lisajoy@nsf.gov. (Press Release of U.S. National Science Foundation) 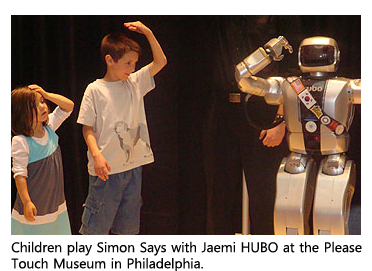