A platform to take on the Huntington’s disease via an innovative approach established by KAIST’s researchers through international collaboration with scientists in the Netherlands, France, and Sweden.

Through an international joint research effort involving ProQR Therapeutics of the Netherlands, Université Grenoble Alpes of France, and KTH Royal Institute of Technology of Sweden, Professor Ji-Soon Song's research team in the Department of Biological Sciences and KAIST Institute for BioCentury of KAIST, established a noble strategy to treat Huntington's disease. The new works showed that the protein converted from disease form to its disease-free form maintains its original function, providing new roadblocks to approach Huntington’s disease.

This research, titled, “A pathogenic-proteolysis resistant huntingtin isoform induced by an antisense oligonucleotide maintains huntingtin function”, co-authored by Hyeongju Kim, was published in the online edition of 'Journal of Clinical Investigation Insight' on August 9, 2022.

Huntington's disease is a dominantly inherited neurodegenerative disease and is caused by a mutation in a protein called ‘huntingtin’, which adds a distinctive feature of an expanded stretch of glutamine amino acids called polyglutamine to the protein. It is estimated that one in every 10,000 have Huntington's disease in United States. The patients would suffer a decade of regression before death, and, thus far, there is no known cure for the disease.

The cleavage near the stretched polyglutamine in mutated huntingtin is known to be the cause of the Huntington’s disease. However, as huntingtin protein is required for the development and normal function of the brain, it is critical to specifically eliminate the disease-causing protein while maintaining the ones that are still normally functioning.

The research team showed that huntingtin delta 12, the converted form of huntingtin that is resistant to developing cleavages at the ends of the protein, the known cause of the Huntington’s disease (HD), alleviated the disease’s symptoms while maintaining the functions of normal huntingtin. 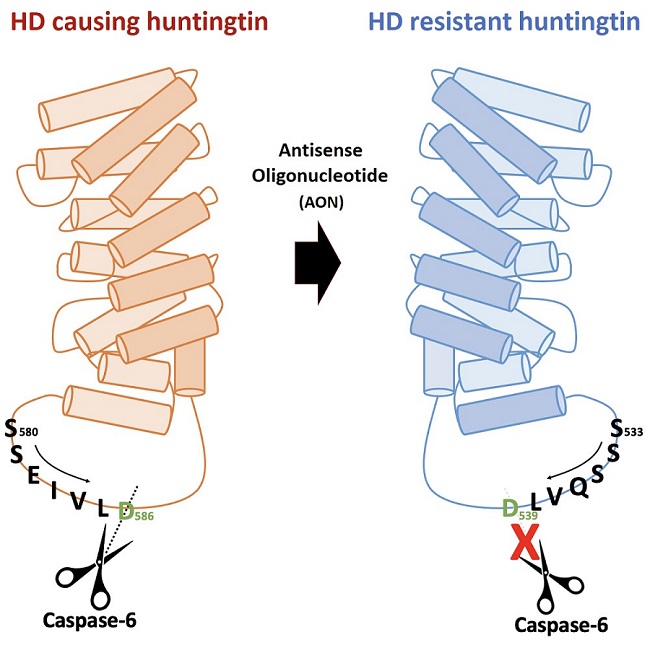 The research was welcomed as it is sure to fuel innovate strategies to tackle Huntington’s disease without altering the essential function of huntingtin.

This work was supported by a Global Research Lab grant from the National Research Foundation of Korea (NRF) and by a EUREKA Eurostars 2 grant from European Union Horizon 2020.