A KAIST research team has developed hardware and software technology that ensures both data and execution persistence. The Lightweight Persistence Centric System (LightPC) makes the systems resilient against power failures by utilizing only non-volatile memory as the main memory.

“We mounted non-volatile memory on a system board prototype and created an operating system to verify the effectiveness of LightPC,” said Professor Myoungsoo Jung. The team confirmed that LightPC validated its execution while powering up and down in the middle of execution, showing up to eight times more memory, 4.3 times faster application execution, and 73% lower power consumption compared to traditional systems.

Professor Jung said that LightPC can be utilized in a variety of fields such as data centers and high-performance computing to provide large-capacity memory, high performance, low power consumption, and service reliability.

To enable both data and execution persistent in legacy systems, it is necessary to transfer the data from the volatile memory to the non-volatile memory. Checkpointing is one possible solution. It periodically transfers the data in preparation for a sudden power failure. While this technology is essential for ensuring high mobility and reliability for users, checkpointing also has fatal drawbacks. It takes additional time and power to move data and requires a data recovery process as well as restarting the system.

The team also presented operating system technology that quickly makes execution states of running processes persistent without the need for a checkpointing process. The operating system prevents all modifications to execution states and data by keeping all program executions idle before transferring data in order to support consistency within a period much shorter than the standard power hold-up time of about 16 minutes. For consistency, when the power is recovered, the computer almost immediately revives itself and re-executes all the offline processes immediately without the need for a boot process.

The researchers will present their work (LightPC: Hardware and Software Co-Design for Energy-Efficient Full System Persistence) at the International Symposium on Computer Architecture (ISCA) 2022 in New York in June. More information is available at the CAMELab website (http://camelab.org). 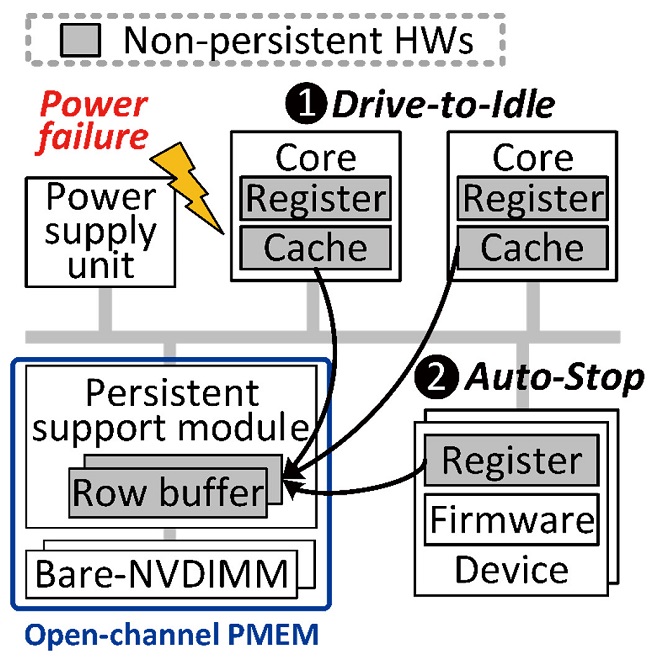 < Figure 2. Overview of the proposed LightPC >

< Figure 3. Energy and performance of the LightPC/LegacyPC (Right: Cycle norm. to legacy PC) >