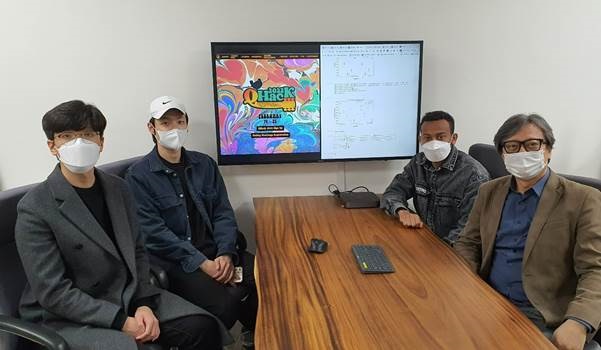 The QHack 2022 Open Hackathon is one of the world’s prestigious quantum software hackathon events held by US Xanadu, in which 250 people from 100 countries participate. Major sponsors such as IBM Quantum, AWS, CERN QTI, and Google Quantum AI proposed challenging problems, and a winning team is selected judged on team projects in each of the 13 challenges.

The KAIST team supervised by Professor Rhee received the First Place prize on the Science Challenge which was organized by the CERN QTI of the European Communities. The team will be awarded an opportunity to tour CERN’s research lab in Europe for one week along with an online internship.

The students on the team presented a method for “Leaning Based Error Mitigation for VQE,” in which they implemented an LBEM protocol to lower the error in quantum computing, and leveraged the protocol in the VQU algorithm which is used to calculate the ground state energy of a given molecule.

Their research successfully demonstrated the ability to effectively mitigate the error in IBM Quantum hardware and the virtual error model. In conjunction, Professor June-Koo (Kevin) Rhee founded a quantum computing venture start-up, Qunova Computing(https://qunovacomputing.com), with technology tranfer from the KAIST ITRC of Quantum Computing for AI. Qunova Computing is one of the frontier of the quantum software industry in Korea.