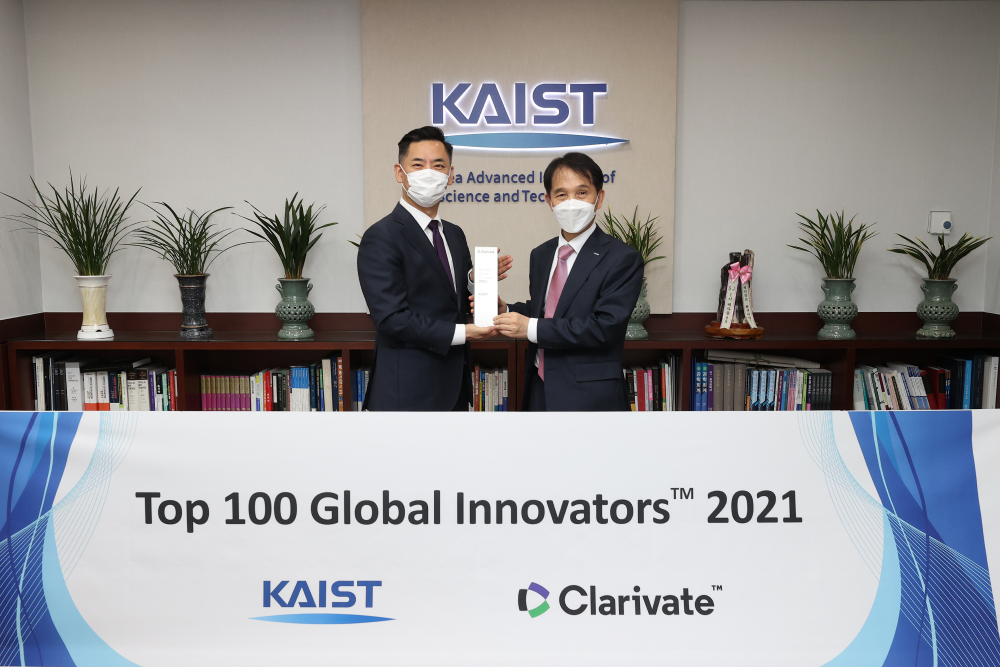 KAIST was named as one of the Top 100 Global Innovators 2021 by Clarivate. Among the top 100, 42 US corporations, including Amazon, Apple, Google, and Facebook, and 29 Japanese corporations made the list. The list included four Korean corporations Samsung Electronics, LG Electronics, LS Electronics, and SK Telecommunications. KAIST, the only university listed as a global innovator, regained its place in the Top 100 Global Innovators this year after last being named in 2013. Industrywide, the electronics and semiconductor sectors took the majority of the top global innovators spots with 21 and 12 corporations respectively.

President Kwang Hyung Lee received the trophy from Clarivate Korea Regional Director Seongsik Ahn on May 12 at KAIST’s main campus. President Lee said, “We are glad that our continued innovation efforts are receiving worldwide recognition and will continue to strive for sustainable growth as a university that creates global value and impact.”

Every year since 2012, the Top 100 Global Innovators has identified companies and institutions at the pinnacle of the global innovation landscape by measuring the ideation culture that produces patents and puts them at the forefront. Clarivate tracks innovation based on four factors: 1. volume of patents 2. influence 3. Success and 4. globalization using patents, patents indices, and citation index solutions.

For measuring the patent volume, the Top 100 candidate must meet a threshold of 100 granted patents received in the past five years and more than 500 in the Derwent World Patents Index over any time period. Clarivate assesses the level of influence of the patented ideas by reviewing the number of external citations their inventions received over the past five years. For measuring success, they look at how successful each candidate has been getting their applications for patent protection approved by patent offices around the world over past five years. Globalization measures the investment levels of each candidate in their patent applications, a metric designed to assess both the importance of invention to the companies as well as the footprint of commercialization.