Schizophrenia is a neurodevelopmental disorder that disrupts brain activity, producing hallucinations, delusions, and other cognitive disturbances. Researchers have long searched for genetic influences in the disease, but genetic mutations have been identified in only a small fraction—fewer than a quarter—of sequenced patients. Now a study shows that “somatic” gene mutations in brain cells could account for some of the disease’s neuropathology.

The results of the study, led by Professor Jeong Ho Lee at the Graduate School of Medical Science and Engineering in collaboration with the Stanley Medical Research Institute in the US, appeared in Biological Psychiatry.

Traditional genetic mutations, called germline mutations, occur in sperm or egg cells and are passed on to offspring by their parents. Somatic mutations, in contrast, occur in an embryo after fertilization, and they can show up throughout the body or in isolated pockets of tissues, making them much harder to detect from blood or saliva samples, which are typically used for such sequencing studies. 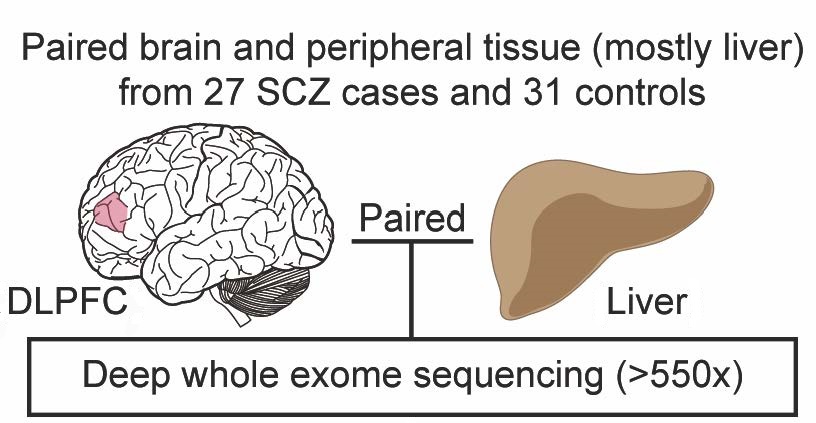 In the current study, the researchers used deep whole-exome sequencing to determine the genetic code of all exomes, the parts of genes that encode proteins. The scientists sequenced postmortem samples from brain, liver, spleen, or heart tissue of 27 people with schizophrenia and 31 control participants allowing them to compare the sequences in the two tissues. Using a powerful analytic technique, the team identified an average of 4.9 somatic single-nucleotide variants, or mutations, in brain samples from people with schizophrenia, and 5.6 somatic single-nucleotide variants in brain samples from control subjects.

In the new analysis, the researchers determined which proteins might be affected by the newly identified somatic mutations. Remarkably, a protein called GRIN2B emerged as highly affected and two patients with schizophrenia carried somatic mutations on the GRIN2B gene itself. GRIN2B is a protein component of NMDA-type glutamate receptors, which are critical for neural signaling. Faulty glutamate receptors have long been suspected of contributing to schizophrenia pathology; GRIN2B ranks among the most-studied genes in schizophrenia. The somatic mutations identified in the study had a variant allele frequency of only ~1%, indicating that the mutations were rare among brain cells as a whole. Nevertheless, they have the potential to create widespread cortical dysfunction.

John Krystal, MD, editor of Biological Psychiatry, said of the work, "The genetics of schizophrenia has received intensive study for several decades. Now a new possibility emerges, that in some cases, mutations in the DNA of brain cells contributes to the biology of schizophrenia. Remarkably this new biology points to an old schizophrenia story: NMDA glutamate receptor dysfunction. Perhaps the path through which somatic mutations contribute to schizophrenia converges with other sources of abnormalities in glutamate signaling in this disorder."

Professor Lee and the team next want to assess the functional consequences of the somatic mutations. Because of the location of the GRIN2B mutations found in schizophrenia patients, the researchers hypothesized that they might interfere with the receptors’ localization on neurons. Experiments on the cortical neurons of mice showed that the mutations indeed disrupted the receptors’ usual localization to dendrites, the “listening” ends of neurons, which in turn prevented the formation of normal synapses in the neurons. This finding suggests that the somatic mutations could disrupt neural communication, contributing to schizophrenia pathology.

The Graduate School of Medical Science and Engineering