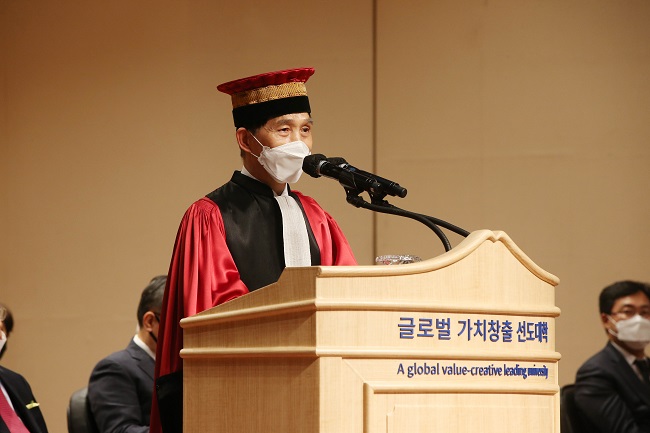 < President Lee delivers his inaugural address during the inauguration ceremony on March 8. >

KAIST’s 17th President Kwang Hyung Lee reaffirmed his commitment to building a new future preparing for the post-AI era during his inauguration on March 8. The Board of Trustees selected the former provost and executive vice president as the new president, succeeding 16th President Sung-Chul Shin whose four-year term expired last month.

In his inaugural address, President Lee proposed a new culture strategy, ‘QAIST’ designed to foster more creative talents and ensure innovative research infrastructure. He said that the best way to stand out as a leading global university is to carve out our own distinctness.

The ceremony was live streamed via YouTube due to the social distancing guidelines, with a very limited number of distinguished guests attending. Among them were President Lee’s former student Jung-Ju Kim who started Nexon, now the world’s most popular online game company, and former Chairman of the Board of Trustees Moon-Soul Chung who President Lee worked with when he made the endowment for establishing the Department of Bio and Brain Engineering in 2001 and the Moon Soul Graduate School of Future Strategy in 2013.

In his induction speech, Chairman Woo Sik Kim of the Board of Trustees said that President Lee is a proven leader who has deep insight and passion and he will help KAIST make a new leap forward. “I believe that Professor Lee will be the right leader at this critical moment for the university, ushering in a new future for KAIST as it turns 50 this year.”

President Lee explained that for the next 50 years, KAIST should double down to identify the challenges humanity faces, then define and resolve them with unyielding innovations in education, research, technology commercialization, and internationalization. 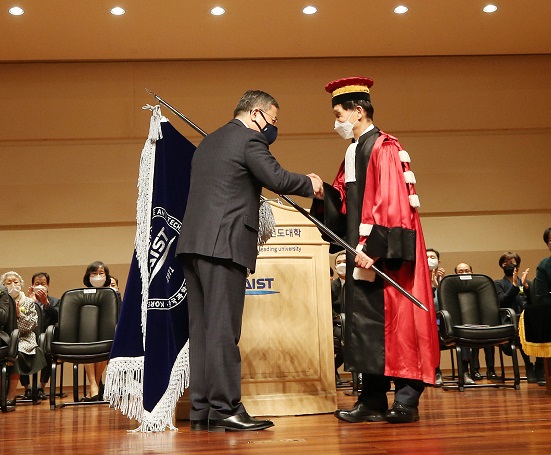 < The 16th President Sung-Chul Shin (left) hands over the KAIST flag to his successor President Lee. >

“We definitely should pull together to produce sustainable global value that will serve the prosperity and happiness of all humanity, not only our nation. We will become one of the top 10 universities in the world when we realize all these goals. We can live up to the people’s expectations by producing creative global talent, staying ahead of new research topics, and producing corporations that will lead the nation’s industries.”

“To this end, I will continue to strive to help us achieve our mission of becoming a ‘Global Value Creative Leading University’ as described in KAIST Vision 2031. I will do my utmost to bring about the ‘KAIST New Culture Strategy, QAIST’ for a post-AI era.”

He added that he would like to inspire students and faculty to have more humanistic approaches in their education and learning. The ‘Q’ in “QAIST” refers to questioning. President Lee believes that the learning starts with questions and being curious about something. “We will innovate the educational system to have them question everything.”

Then, he said that he will focus on ‘A’dvanced research to prepare for the post AI-era. “We should be the first mover who can define and solve new problems. It’s more important to be the ‘first’ one than the ‘best’ one.” He also said he will create a new culture that failing would not be stigmatized, offering more chances after failing.

‘T’rust building is the prerequisite value for creating transparent and reliable management in finance and HR. President Lee said he would like to make a new organizational culture that will be more ethical, responsible, and autonomous with a high standard of integrity.

His predecessor, President Sung-Chul Shin lauded his successor in his congratulatory speech saying, “He is a president prepared for this job.”

“I have known him for more than 30 years. He is a man of action. With unparalleled ideas and prompt execution, he carried out all his duties efficiently for the Committee of Vision 2031 that he chaired, and played a central role in establishing the full vision of KAIST. First and foremost, he is a man of great passion, with a firm vision but a warm heart.”

< Nexon founder Jung-Ju Kim, former student of President Lee, makes an emotional tribute to his professor during the ceremony. >

Nexon founder and Chairman Jung-Ju Kim also made an emotional tribute to his former professor. Holding back tears, he said, “I was not a good student. I was struggling in my graduate courses so I had to drop out of my PhD course. But Professor Lee and his wife never gave up on me. They were so kind to me and were always encouraging despite my disappointing days. I am now ready to do something good for KAIST, for Professor Lee, and for the future of our society. I believe that President Lee will guide us down the new path for KAIST.” IDIS Holdings CEO Young-Dal Kim also attended the ceremony to congratulate his former professor on his inauguration.