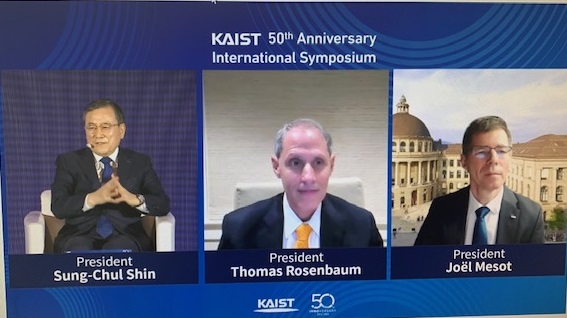 The presidents of three premier science and technology universities shared their belief that universities should move forward to embrace social changes while maintaining the importance of academics for future generations during the KAIST International Symposium on February 16.

The symposium, one of the events to celebrate KAIST’s 50th anniversary, highlighted the future role of universities over the next 50 years by hosting a panel featuring ETH Zurich President Joël Mesot, Caltech President Thomas Rosenbaum, and KAIST President Sung-Chul Shin. Members of the foreign diplomatic corps representing seven countries also explored the new model of global collaboration in the second session.

President Rosenbaum of Caltech said that even though society is changing, the role of universities will not be different since the value of knowledge will always be important. He said that universities must embrace change.

He said that universities should move forward fearlessly if they believe it would impact wider society positively. He added that universities should also be courageous enough to take a new path based on longer-term perspectives and lessons learned from successes. One of the roles of universities is to establish various hypotheses and possible prospects, raise doubts, and go forward with a strong will for the future generations to come.

He cited LIGO (the Laser Inerferometer Gravitational-wave Observatory), as a good example of a successful university-research collaboration. LIGO is funded by the National Science Foundation in the US and operated by Caltech and MIT. Approximately 1300 scientists from around the world, including the Max Planck Society in Germany and the Science and Technology Facilities Council in the UK, participate in the LIGO Scientific Collaboration. In 2019, the international team of scientists detected the collision of two black holes with masses about 142 times the mass of the sun in the most massive collision ever detected. MIT Physicist Rainer Weiss shared the Nobel Prize in Physics with Professor Barry Barish and Professor Kip Thorn from the Department of Physics at Caltech in recognition of their contribution to the LIGO detector and the observation of gravitational waves.

President Mesot of ETH Zurich stressed that universities should foster young talents well versed with creative thinking and entrepreneurship in this new era. He also said that COVID-19 has reaffirmed the importance of science and global collaborations beyond borders to address global challenges such as pandemics. President Mesot said COVID-19 has taught us the value of science and R&D, adding that the roll-out of a vaccine in only one year would have been impossible without the decades-long R&D foundation that universities and industries have established.

He also gave the example of the MRI as a reason universities should provide strong basic science research foundation. In 1944 in the US, Dr. Isidor Isaac Rabi won the Nobel Prize in Physics for his discovery of nuclear magnetic resonance. The MRI research inspired many ETH professors for further studies and led them to win the Nobel Prize in Physics in 1952 for their MRI basic theory and in 1991 the Nobel Prize in Chemistry with the development of high-resolution spectroscopy. “The MRI first started 80 years ago and still applies in today’s medicine. We should focus on research which will keep such value,” President Mesot said.

Meanwhile President Shin also said that the age of the Fourth Industrial Revolution has been deemed the "winner takes all" era. At this highly competitive time, R&D activities are more meaningful if they produce the world’s best, first, and only outcomes.

“We aim to achieve excellence in research with long-term innovative research support systems.  We will conduct R&D activities that will lead the megatrends of the Fourth Industrial Revolution: hyper-connectivity, super-intelligence, and meta-convergence. In addition, we will double down to conduct forward-looking flagship research that will enhance the happiness and prosperity of all humanity in the areas of global warming, infectious diseases, bio-medicine, energy and environment, smart technology, and post-AI.”

Responding to one of the student’s question about what mindsets are expected of students enrolled in government-funded national universities, President Mesot made three suggestions. First, they should remember that they are privileged, so they should give back their talents to society. They should also be patient with what they are doing even when they don’t achieve the desired results. Lastly, they should remain open to new ideas and be flexible when encountering disruptions. 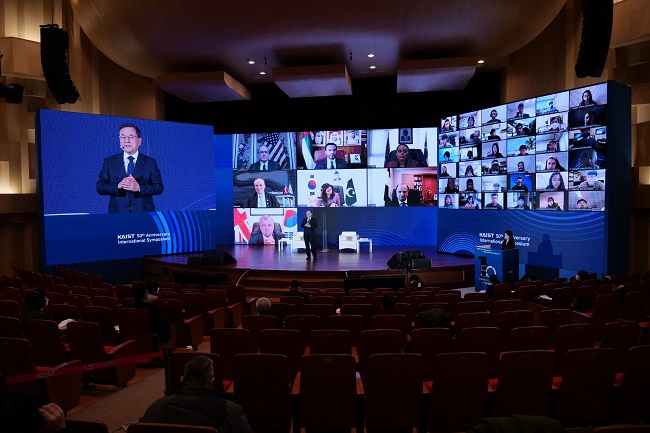 They all agreed that KAIST is one of the shining examples of successful international collaboration stemming from the international aid loan from USAID. Five decades later, KAIST now is working to help the Kenyan government to establish Kenya KAIST with a 95-million US funding from the Korea Exim Bank.

While stressing the importance of global collaboration for inclusive growth in the global community, the seven diplomats gave their insights on the newly transforming global environment intertwined with COVID-19 and the Fourth Industrial Revolution.

In the face of global changes caused by emerging technologies and carbon neutrality, the ambassadors expressed a strong desire to make collaborations between KAIST and their countries to propel new innovations in industry and education in their countries.