KAIST held an opening ceremony for a new defense research center focusing on modelling & simulation located at its main campus in Daejeon on Thursday (June 19).

The opening of the M&S Technology Research Center is aimed at developing technologies and processes to test, practice and operate newly-developed precision and micro weapons systems in virtual space. The center will be supported by two state-run defense agencies, the Defense Acquisition Program Administration and the Korean Agency for Defense Development.

The new research center is expected to receive a total of 11.5 billion won (US$11.2 million) research grants from the state for the next eight years until 2016. The center will be involved in the development of sophisticated, complex and inter-related weapons system and training research personnel in the specialized area.

The research center will undertake a total of 21 specific projects in collaboration with seven other universities in Korea. Also joining the projects are such overseas institutions as Georgia Institute of Technology and the U.S. Naval Post-Graduate School, and private defense solution providers including Posdata, Samsung Thales and LIG Nex 1.

The opening of the research center comes at a time when modelling and simulation gain growing importance as today"s armies employ more sophisticated, complex and inter-related. weapons systems and equipment than ever before.

Tae-Uk Lee, director of the research center said: "The opening of the center will spur development of operational technologies of precision and micro weapons system on our own, departing from dependence on advanced countries." 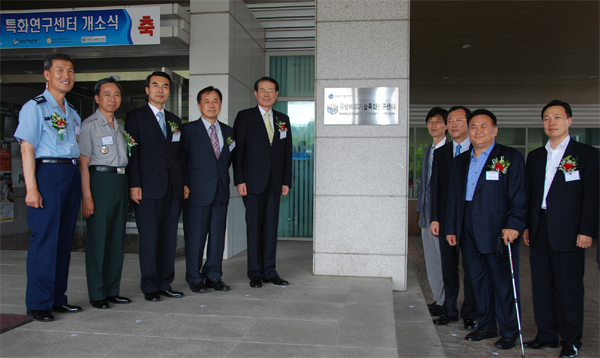